I kept waiting for the duff track and it didn’t happen. Nearly a decade and a half (and five significant line-up changes) into their career, A Song For You proved that the Temptations could keep up with trends while retaining their identity, demonstrating what a durable and malleable brand the group had become. The story goes that Mr. Gordy himself helped midwife the record, making sure that the band got the best chunes going–the effort paid off big time. A US R&B #1 album (and Top 15 US pop), featuring two US R&B #1 singles (and another Top 10), Song is literally a game of two strong halves; side one brings a trunk of stripped-down, aggressive funk while side two features brooding, emotionally resonant ballads. Both approaches work with the former belying the Temps veteran status and the latter acknowledging maturity without succumbing to it. Inexplicably, this album garnered only one and two stars respectively in the first two Rolling Stone Record Guides. WTAF?

Another of Saturday’s less-than-a-pound-apiece batch from Hythe.

It wasn’t total victory; though the vinyl’s in pretty good nick, there’s a tuck-in flap missing from my top loader copy. 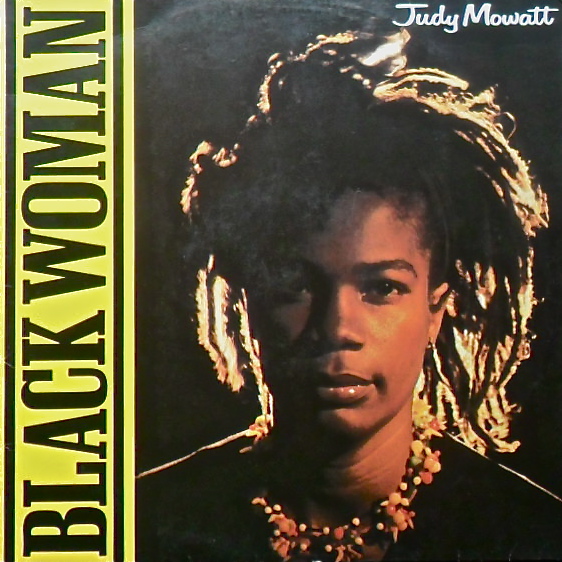 Recorded at Harry J’s, Dynamic and Channel 1 with the best of JA’s usual suspects supporting, the self-produced, gospel/R&B inflected solo début by I-Three’s singer Mowatt is nothing if not professional. And sometimes, as on “Slave Queen” and “Sisters’ Chant” it’s great. The self-conscious feminism, too, is refreshing in a genre (roots reggae) dominated by male hierarchy. For less than a pound (it was part of a 6 Lps for a fiver deal), I’d say we’re winning the whole way ’round. 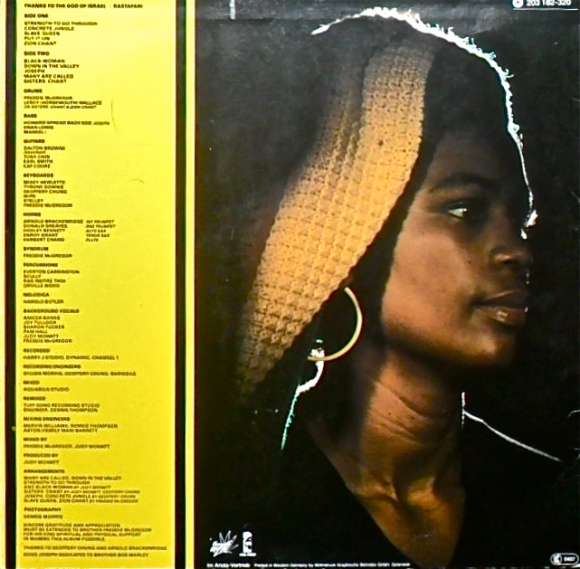 There are at least two other covers that I think I would’ve preferred, the Jamaican one or the US one, but thrifters can’t be choosers, can we.

(Los Angeles, CA) – Warner-Reprise Records, in conjunction with Rhino Handmade Records, are set to reissue UK singer Linda Lewis’s landmark 1972 album Lark as a 10 CD/15 Lp box set. In addition to now-standard deluxe fare such as digital remastering, analog remastering, alternate takes, alternate mixes, demos, mono editions, extended studio chat as well as DVDs of Top of the Pops performances/rehearsals and a 2 hour+ making of documentary, the gargantuan treasure trove will feature a 14″ x 14″ thick cardboard box with a “tip on” mylar-coated sleeve, hand-covered in actual lark feathers. Also included is a book of stamps featuring the head of the five-octave session singer photoshopped onto the bodies of early 1970s Playboy centerfolds. People who buy the first edition of the Lark re-issue will receive a coupon redeemable for a provocative 2x life-size in-store stand-up of the image of the West Ham songwriter-producer born Linda Ann Fredericks from the 1977 Woman Overboard album. A 345-page, perfect-bound book of co-producer Jim Cregan’s session notes completes the package.

Rhino also plans to make available a “super deluxe version” containing all of the above material on unplayable 21 one-sided 10″ 78 rpm shellacs (each weighing 440 grams!) along with a sensory deprivation chamber that has been embossed with images from John Kosh’s original sleeve and then signed and numbered by the artist. “Actually ‘sensory deprivation chamber’ is a bit of a misnomer,” explained Manny Birnbaum, the Rhino executive who spearheaded the project. “In fact, while you lay suspended completely motionless in warm, odourless distilled water in complete darkness, your auditory senses will be vaguely stimulated by an MP3 loop of Lark played at subsonic volume.”

Fans of Rickie Lee Jones, Joni Mitchell, Minnie Ripperton will find much to unfavourably compare here. Likewise, the gentle, commercial nature of the music will appeal to those who find Laura Nyro too challenging. US music consumers will likely not have heard of Lark‘s sole UK Top 20 hit, the helium-voiced “Rock-a-Doodle-Doo”.

Birnbaum called the sets “in no way excessive” and “perfectly commensurate with the artistic merit of the masterpiece that is Lark“.

As extra incentive to early purchase, as if any were needed, the first 1,000 copies will come with a bonus disc of the 1987 CD edition on EG (EGKC 6) of King Crimson’s Larks’ Tongue In Aspic, copies of which currently lie unsold in a Warner’s warehouse in Burbank, California. By remarkable co-incidence, the King Crimson Lp originally saw release just one year after Lark. 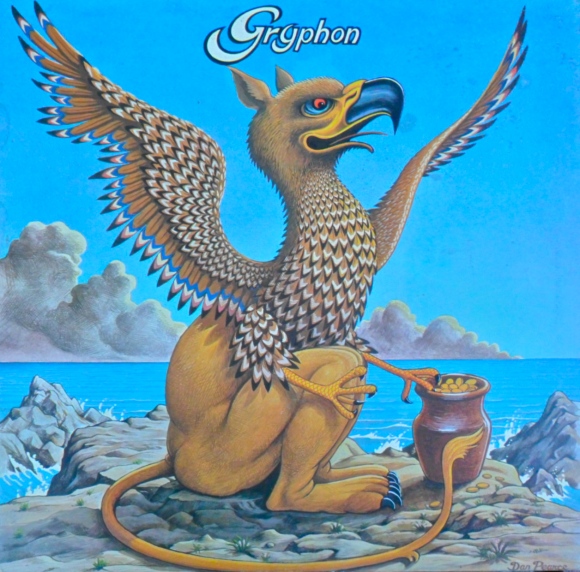 Proggressive Rock with a difference. For while Gryphon emphasised the tricky time signatures and flashy ensemble polyphony so common amongst its proggy brethren, the band favoured a folky medieval flavour, both in instrumentation and repertoire. The overall effect is cute, maybe too cute, but would perfectly suit a children’s documentary about the Middle Ages. Gonna hafta be in a peculiar mood to listen to it.

Quality textured gatefold cover and stunning full-colour label highlight this VG+ first edition of Gryphon’s début found in the same batch of bootfair Lps as most of the recent posts.

“Reggae Bump” is particularly pointless; it’s funny, contemporary JA guys would have killed for the budget/facilities at SW’s disposal, but the creative problem solving which informs and enhances so much of 70s reggae would have been totally mitigated, as is the case here for the most part. Still, not bad for 50p at the same bootfair as what the De La Soul, Beach Boys and CCR Lps came from.

BLUESMAN DEAF WILLIE PO’ BOY, DEAD AT 112          Little-Known Singer’s Passing Goes Unremarked (Clarksdale, Mississippi) — The death at age 112 of perhaps Mississippi’s least-heralded bluesman, Deaf Willie Po’ Boy, was announced yesterday to little fanfare. With his inarticulate, tuneless wailing, a trademark nasal whine which rock critic Robert Palmer likened to “the noise a mother tapir might make were she stuck in a bear trap watching her babies be slaughtered and eaten”, the frighteningly obscure singer-songwriter made little to no cultural impact during the genesis of the country blues in the American south during the first half of the 20th century.

Willie’s signature tune, “The Pardon Me Rag”, famously appeared nowhere on Harry Smith’s landmark Anthology of American Folk Music, thus marking him out as a non-entity during the folk revival of the 1950s and 1960s. Later, his songs, “What You Say?”, “Better Put It In a Letter” and “You’ll Have to Repeat That Blues” remained all but unknown, and certainly unplayed, by British blues aficionados like Cyril Davis, Alexis Koerner and John Mayall. Indeed, legend has it that the Rolling Stones first manager and producer, Andrew Loog Oldham, actively discouraged his charges from learning any of Po’ Boy’s music, calling it “crap of the first water”. In addition, Willie merited no mention whatsoever in the recent autobiographies of both Eric Clapton and Keith Richards. To this day, blues musicians have consistently refused to cite him as an influence, seminal or otherwise.

Born William Heingartner in 1901 to remote rutabaga farm slaves whose owner hadn’t been told that Abraham Lincoln had set African-Americans free over four decades previous, Willie’s plantation field birth was a joyous event for his mother, Lulabelle, as it meant she could stuff the newborn in the rutabaga sack she was carrying to make up the day’s weight quota. Unfortunately, pressure from two yellow turnips damaged the infant Willie’s stirrups, causing his deafness and a life-long dislike of root vegetables. The young Heingartner left home at age 13, marrying a week later. The marriage, however, was short-lived, his wife cheating on him during their honeymoon. It is believed that this event marked the point at which he turned to blues music as a means of self-expression.

Willie was an elder of blues great Robert Johnson and it is believed that the two never accompanied one another onstage, giving rise to speculation that Johnson probably didn’t see Heingartner play at juke joints in the Mississippi delta, where the hearing-impaired guitarist was banned from performing as a result of his profound incompetence. Around this time Po’ Boy achieved some notoriety by claiming to be the father of Charley Patton, despite being born at least a decade after the Father of the Delta Blues. The next time anyone heard of Willie was in 1970 when he brought a suit against Jimmy Page claiming copyright infringement. Po’ Boy alleged that the Led Zeppelin leader had stolen the lyrics to his song “I’m Fixin’ To Git Me A Hearin’ Aid” for the band’s 1969 epic, “Dazed and Confused”. The case was thrown out by the judge who was unable to decipher the original words due to Willie’s impenetrable speech. Later in life, friends and neighbors expressed gratitude that Heingartner had given up singing, though he still caused much irritation at family and social events by playing untuned guitar.

Before he died in 2001, noted folk-blues scholar John Fahey recalled of Deaf Willie Po’ Boy: “Nope, can’t say I ever heard of him.”