It’s not kitsch, it’s not a joke, it’s not taking the piss and it doesn’t only work when you’re high: if you play the “Jolene” single at 33 RPMs, it sounds awesome. I bought this today to enjoy the unintended consequence of someone’s late night jape.

I’ve never been a particular fan of Lee Hazlewood, his productions only just the right side of kitsch for my taste, but I couldn’t resist this country-pop crossover by long-time muse Sinatra today as it was just being put out at a chaz in Hythe. Seems everyone and their 13-year old first cousin made a country Lp back in the 60s, but this one works on account of top-notch playing and song selection, though Hazlewood must be the only singer in the studio technically worse than Sinatra.

This one’s for my homies, Out of Town DJs.

(Nashville, TN) — Country Music legend Tammy Wynette observed the nation’s annual Opposite Day celebrations yesterday by physically battering husband George Jones and refusing to attend a taping of Hee Haw while getting blackout drunk and having herself committed to a sanitorium. Laughed Wynette of her topsy-turvy 24 hours, “It’s kind of fun to enter a bizarro world where I’m not the one receiving blows or having table lamps being thrown at my head.”

“Add to that my Hee-Haw non-performance and waking up hungover in a mental institution covered in vomit and piss stains,” continued the “Stand By Your Man” singer, “and, well, I can tell what Ol’ Possum sees in it.”

In related news, hubby Jones plans on spending the entire evening knocking them back at the Dew Drop Inn on Park Street with fourth-born girl-child, Tamala Georgette for next Monday’s Take-Your-Daughter-to-Work Day. Thumper’s Grand Ol’ Opry show at the Ryman Auditorium that night will be rescheduled and later cancelled.

Editor’s Note: A lovely pair of lachrymose country balladeering elpees by one-time Mrs. Jones. Perfectly played and delivered, only a pound a piece at the Cats Protection chaz in Hythe last week. Country music is much bigger business in the UK than I’d ever imagined.

Proper shit-kickin’, good ol’ boy, a-pickin’ an’ a-grinnin’ Southern fried rock. And if I could think of a hunnert more corn pone, gerund-utilising-apostrophes descriptions, I would add them, too.

With a tip o’ the Stetson to the Allman Bros. (two drummers, a couple side-ending extended, jazzy jams), things get funky with more than a little help from an excellent bass guitarist. Daniels’ affected vocals resemble Dr. John’s, if not quite as rich in personality. This original Kama Sutra issue includes the shaggy dog novelty, “Uneasy Rider”, which gave the 1976 Epic re-release its title. I got Honey from Demelza in Hythe today for but a quid.

Wither the live album? Time was when the live album wasn’t a mere souvenir, a wallet liner for some dinosaur’s mega-tour or superfluous bonus disc on an album’s deluxe CD edition, but a genuine re-imagining of an artist’s oeuvre in front of a concert audience. Such is the case with Mickey Newbury’s genial, solo acoustic Live At Montezuma Hall.

Perhaps slightly less eccentric musically than its follow-up, ‘Frisco Mabel Joy, Looks Like Rain is a likewise acoustic guitar-led slow-burn that shares with that record a thoughtfully burnished musical and world-weary coherence. In fact, another gem. Purchased yesterday from Demelza House in Hythe, this issue comes as a twofer alongside the live Lp.

Originally released by Mercury, the rights to Rain were picked up by Elektra who released two more studio Lps before appending it to the live collection–I don’t think Montezuma Hall is available on vinyl by itself.

This leaves me two-thirds of the way towards thrifting Newbury’s American Trilogy with just Heaven Help the Child to pick up. Go Asbo! 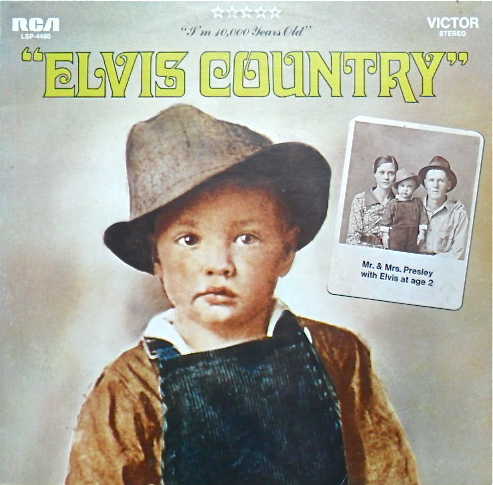 (Loma Linda, CA) – It was pointed out today to 50,000,000 Elvis fans that, contrary to received smart-assed wisdom, the tomato is actually a vegetable, and not a fruit after all.

Talking exclusively to Thrifty Vinyl, Professor Jason Frith said, “Fifty million Elvis fans, like most wise-acres, will tell you that the tomato is a fruit since a ‘fruit’ is a plant with fleshy material covering a seed or seeds. And yet, from a horticultural perspective, the tomato is a vegetable because, unlike all other so-called fruit (with the sole exception of the strawberry), it does not grow on annual, woody plants.”

“In addition,” the Harvard-educated scientist told us, “an 1893 United States Supreme Court ruling declared the tomato a vegetable and therefore subject to import taxes.”

But speaking on behalf of 50,000,000 Elvis fans, the Graceland Foundation’s James Newell called the Supreme Court decision “arbitrary and illogical”, arguing that the 19th century justices were “kow-towing to special interests who wanted the tomato classified a vegetable simply to protect U.S. crop development and prices.”

“And just because people put tomatoes on their salad, doesn’t make it a vegetable,” claimed Newell. “Botanically speaking, it’s still a fruit.”

50,000,000 Elvis fans have also recently been proved wrong about Elvis’s invention of Rock & Roll, with dozens of artists, Ike Turner, Little Richard, “Big” Arthur Crudup and Chuck Berry to name but a few, performing music that any reasonable person would call “rock and roll” prior to the recording of Presley’s first single, “That’s Alright, Mama” in 1954. 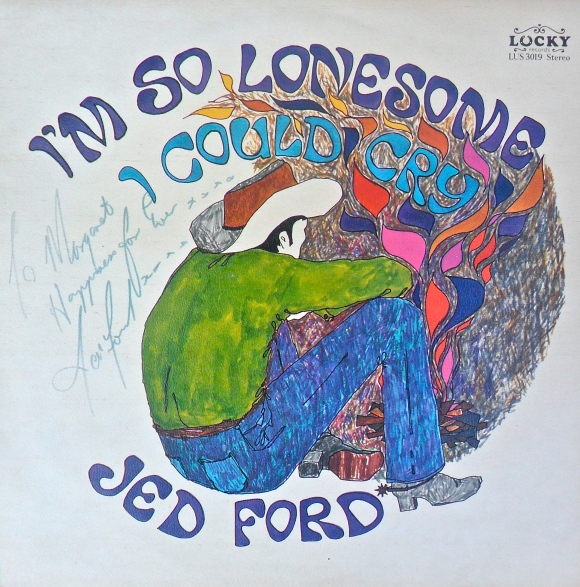 All singing is by definition contrived. I mean, no one talks that way normally do they? From Maria Callas to Frank Sinatra to Elvis to Aretha to David Byrne to Tyler the Creator. It’s all a put on. But there must be something in a singer’s pretensions that is true to that person. Usually, unlike other aspects a person’s personality, that something is a product of the singer’s environment, i.e. it’s almost always nurture as opposed to a tandem with nature.

This is what I think makes Jed Ford’s I’m So Lonesome I Could Cry , an Lp of mostly classic country covers, such an odd case. First of all, the name, an obvious fake, but it’s not unheard of for a performing artist, even a country one, to affect a stage name. Next, the man’s  southern drawl. Again, not only is this no hindrance to C&W singin’, it’s positively requisite. But here’s where it starts to get a little murky; I know nothing for certain because little information exsists on the interweb, but I believe Jed’s a Limey who’s appropriated the old-school Country croon to the degree only a reformed smoker or a recent convert to Islam or a hopeful outsider could muster. It’s like those bowl-cutted Washingtonians, the British Walkers, only in reverse. Or maybe it’s more akin to all those white Brits who, in Sonny Boy’s words, “want to play the blues so bad…and they play the blues so bad!”

So how did Ford get so caught up in country music that he had to do this? A clue might exist in his song “You ‘Aint Gonna’ Pick On Me” wherein he confides to the listener that “them people up in Liverpool, I know they take me for a fool”. Now, our drummer friend Ringo will tell you there was a pronounced Country vibe Mersey-way, and maybe Ford was ensconced in some Scouse/Redneck enclave. I really don’t know.

Anyway, for all its trans-Atlantic, anachronistic affectation, I’m So Lonesome is a pretty good record. And I’m lovin’ the magic marker cover.

Back on the UK thriftin’ express, I got this yesterday in Hythe.

(Columbus, OH) Erroll Graine obviously thinks he’s some kind of fucking music critic or something the way he bangs on and on about record minutia in that smarmy, know-it-all way of his, patrons of local music emporium Secondhand Student Records reported yesterday.

“Jesus, what a prick,” recalled Phillip Green. “When I brought this country record I’d got in the cheapo section up to the counter, he goes, ‘Ah, songwriter Dan McCorison’s eponymous debut’–I mean, who ever uses the word ‘eponymous’?”

“Oh yeah,” agreed Tom Weston, another Second Student customer,”That guy’s totally into ‘crit-speak’ bon mots, using words like ‘oeuvre‘ and ‘canon’ and ‘sophomore effort’ and describing records as like someone else ‘on acid’.”

“I like to think I’m doing a public service,” smiled Graine smugly unaware of the irritation he causes. “If people come into a record store, you know, they expect some expert guidance which I’m happy to provide.”

“Like that Dan McCorison Lp I sold today….” The dorkwad, now beginning to witter as if unable to help himself, launched into music writer mode.

“I definitely enhanced that guy’s shopping experience by explaining that it betrayed none of its producer’s former band’s glorious harmonic sheen, but rather was the kind of likeable, half-decent country record you found clogging up the K-Mart cut-out bin back in 1981.”

“And really, you should have seen how grateful he was when I pointed out that the only blip in the album’s aw-shucks-ma’am, hick-schtick was a truly bizarre reggae take on Johnny Cash’s ‘Ring of Fire’.”

Secondhand Student manager, Dan Onhigh, believes Graine is “perpetually stringing Dorothy Parker-isms in his head” and is so able to blurt them out when required.

“He should start a blog to get all that bullshit out of his system,” Onhigh said. 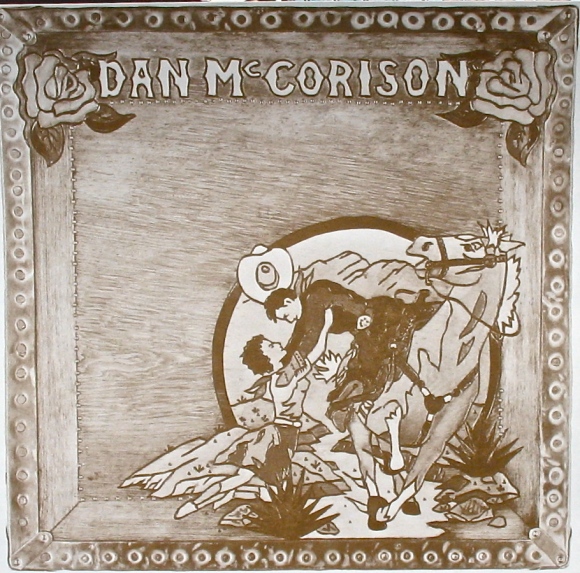 I can’t tell from the (autographed!) sleeve and research is inconclusive, but I believe this is a compilation of 60s singles by Virginia country musician Teenie Chenault released around 1969-1970 and may have been produced by Pete Drake. And 90˚straight edge high-lonesome country it is with pedal steel cryin’ in every alcohol consumption/relationship troubles song; the only exception to the good lovin’ gone bad scenerio is “You’re No Inspiration” and that’s about a woman who doesn’t cheat, run around, beat time, etc. on her man and is therefore “no inspiration, Gracie, for a hit song.” Nice little turnaround there.

While the song-writing and vocal delivery inevitably lack the panache of the first-rate country singers of the day, the band is very good and there’s something otherwise heartwarming about this nifty regional C&W Lp: In a sense, it’s real folk music, you know.

Awesome cover that I have to suppose is of an earlier vintage; even country singers, who are, almost by definition, several years behind the times, wouldn’t look like that by the turn of decade, though, funny enough, Bryan Ferry certainly looked like Teenie (below) a couple years later. Chenault’s band were regulars at Wheeling, West Virginia’s Jamboree USA, which is just a few miles from my Grandparents place, so it’s possible that I would have seen the Country Rockers advertised as a young boy. 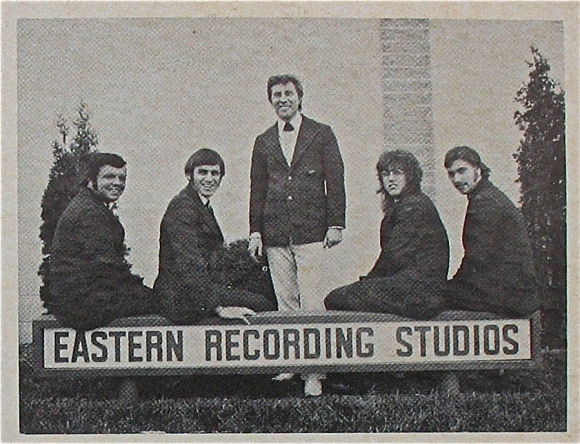 The most interesting piece of writing I found about Chenault comes from the book, Tourette – That’s What Makes Me Tic, starting on page 108. 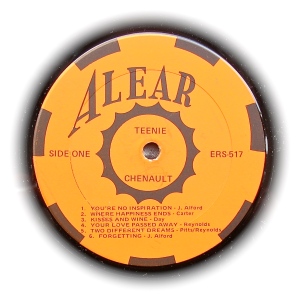 What with a few of his own standards (“Funny How Time Slips Away”, “Hello Walls”) and those of others (“Nightlife”), songwriting on this budget-looking United Artists comp of the Red Headed Stranger’s early 60s Liberty Records material is always well above par. The treatments, Owen Bradley-style background singers/strings à la Jim Reeves, while a bit Hollywood, don’t overwhelm Nelson’s reedy, talk-sing vocals, the contrast even adding to the pathos. The mood is meditative throughout apart from a very uptempo, very jazzy “Columbus Stockade Blues”. The version of his own “Crazy” can’t touch Patsy Cline’s more famous take, but then what can?

Another from yesterday’s Demelza House bunch…more to come.