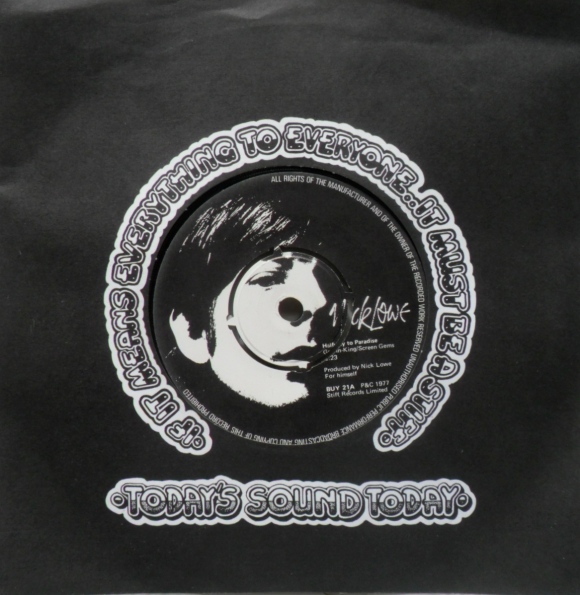 (Columbus, Ohio) – Facebook reported temporary shutdowns today as hundreds of millions of ill- or partially-informed members posted mawkish tributes to Gerry Goffin, a lyricist of whom 99.97% had no or, at best, passing knowledge, who has died age 75.

Local Columbus songwriter and folk musician Tom Fox Tweeted enthusiastic praise, writing that wordsmith “Goffing [sic] was a legend in our business” who “had a sweet way with melody.” This brought to a total of one the number of times in his life Fox had made mention of Carole King’s former songwriting partner.

Coincidentally, Eric Weiss updated his Facebook status with a YouTube link to Nick Lowe’s endearing cover of Goffin/King’s “Halfway To Paradise” to celebrate the 30th Anniversary of a Nick Lowe and His Cowboy Outfit show he saw at the Cleveland Agora. 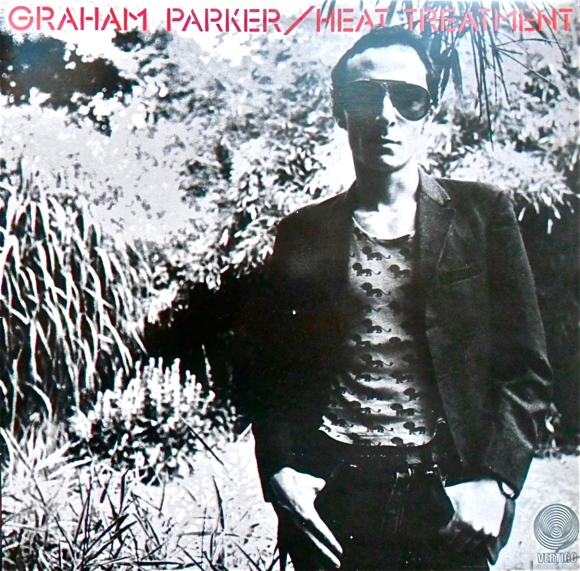 Not a record of innovation, rather, consolidation and refinement. By 1976, these kinds of classic rock moves had been perfected (by Springsteen, Segar, et. al) and there was enough history for self-conscious, artful capitulation (American Graffiti, Quadrophenia, etc., etc.). So, having paid their dues, GP and his band made an album to stir the hearts of cynics who still believed in rock & roll as some sort of living, breathing salvation.

For some reason, it makes me think of Cleveland, Ohio.

Everything is in its place: Hammond filigrees dance, guitar fills sting, stop-time drums and horns punctuate with defiance and an everyman lead singer snarls and rails. Everything, indeed, that would grow stale and tired over the next few years in the hands of lesser songwriters, as well as Parker himself. Handling itself with an assurance borne of years on the road, the Rumour surpass the energy and focus of former employers, notably Brisley Shwartz. Only the Nick Lowe-produced “Back Door Love” succumbs to oldies pandering.

A £1 treat yesterday from Ashford bootfair for someone who’s habitually dismissed Parker after not falling for the charms of his supposed masterpiece Squeezing Out Sparks. 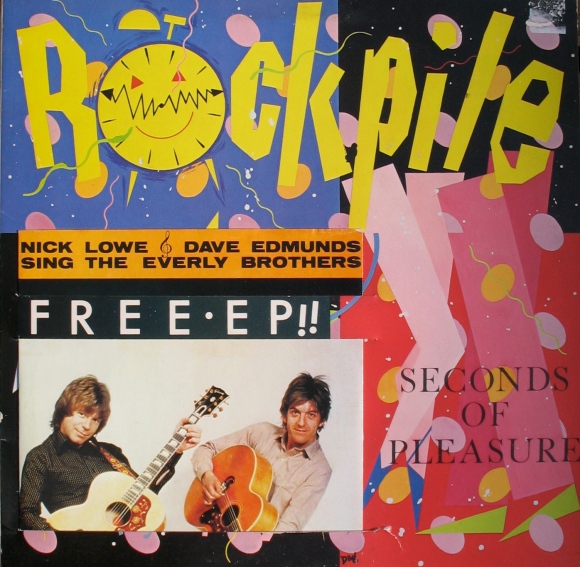 When loading the lone Rockpile Lp (named for a then-unreleased Elvis Costello song, trivia buffs) on to the spindle of my turntable yesterday, my eye was caught by the inscription on the run out groove: “DEY DOO DONT DEY”. And so, flipping over: “WEN DEY DUZ IT DEY DUZ IT”. While I’ve seen many such messages, I wonder why it doesn’t happen more often. Incidentally, there’s a further notice to the effect that the vinyl was “A PORKY PRIME CUT”, which I had noticed on my recent Venus and Mars album; an explanation for which can be found here. Another Barney Bubbles design.

This represents the second time I’ve thrifted the glorious Seconds of Pleasure, the American Columbia edition I got (now lost) came missing the Nick and Dave Sing The Everlys ep, which, as it happens, I’d already picked up at a Flea Market years before in Mount Vernon, Ohio. So, that’s like three times, then. 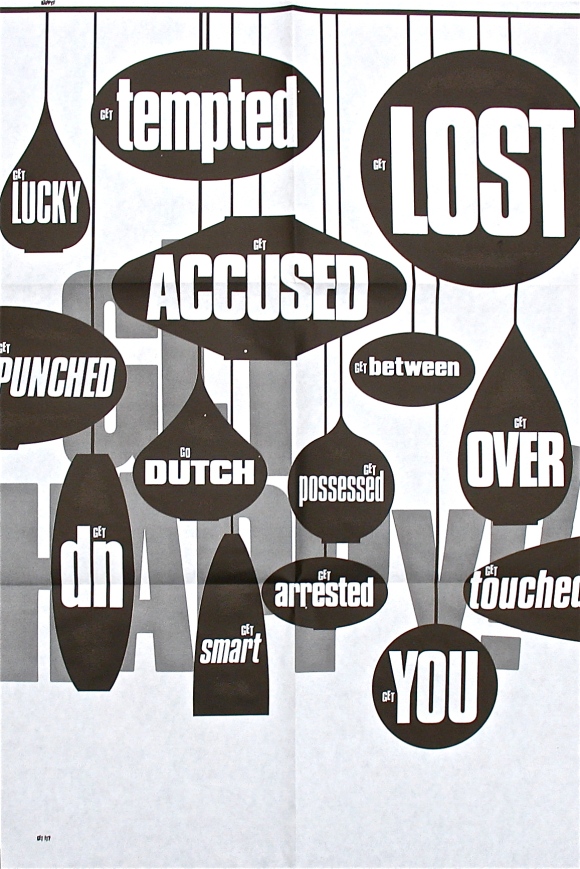 Back in 1980, Elvis Costello was my guy and over the years, I’ve bought that year’s Get Happy!! four times; thrice at retail price (yes, I know, they must have seen me coming)– once when first released in America and two times when re-released on CD. However, it was the most recent purchase of the UK F-Beat (XXLP1) vinyl at the Ashford Boot Fair, last week’s sad Radio 4 documentary on brilliant graphic designer Barney Bubbles (who has featured several times in these pages) and a realisation that, in the meantime, I’ve picked up a boatload of second-hand Get Happy!! –related product that prompted this post. The main reason for the Ashford buy was the inclusion of the imperative “Get” poster, heretofore unowned by me. Not only did the original US edition come poster-less, it was printed on normal cardstock without the conceptually important mylar finish on the front, the inner sleeve was on thin paper and, most egregiously, was not “pre-worn” to look as if pulled from the shelf many times. How I suffered. Costello’s US label, Columbia, must have thought the American record buyers wouldn’t “get” the conceit (as with the previous “misprinted” This Year’s Model) and ask for their money back. 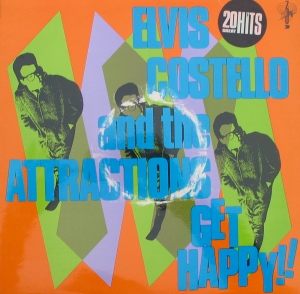 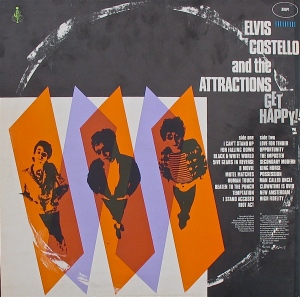 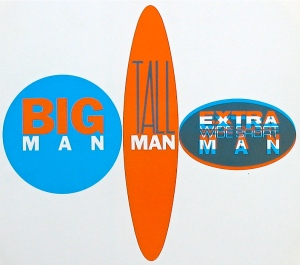 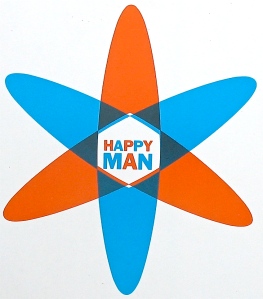 If, as the saying goes, “Clothes make the man, but accessories make the gentleman”  (let’s assume it is), it is likewise the details that make for the better cover. For example, look carefully at the front cover’s upper right hand corner; notice an arbitrary looking geometric icon. Dynamically, it serves to balance the overall image and performs a similar function (though upside-down) in the upper left corner of the back cover much like a record label trademark.  It, like much of the atomic/mod imagery here, is meant to suggest a 50s/60s vintage (see the “High Fidelity” single sleeve particularly), knowingly filtered through a New Wave lens. Further japes include the reversal of tracklisting sides and the artist referring to himself as VAT 245 4945 42, which I imagine was the sales tax ID on Bubbles’ invoice. Incidently, the cover photos were taken with the subjects lying on the ground, the photographer positioned at their heads 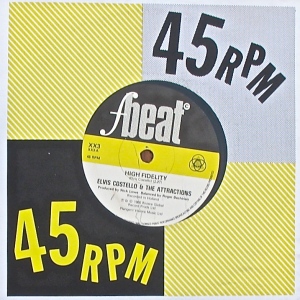 The retro lightbulb image is a rejigged version of a large scale in-store paperboard display poster. This one is part of a fold-out postcard sent to Johnny Go’s House o’ Music (where I was working at the time) alerting the store to the second stage of Rykodiscs’s comprehensive CD re-issue program back in the 90s. 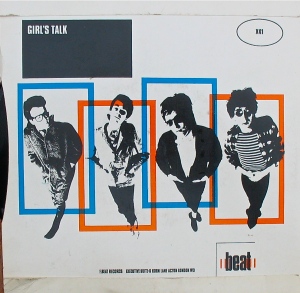 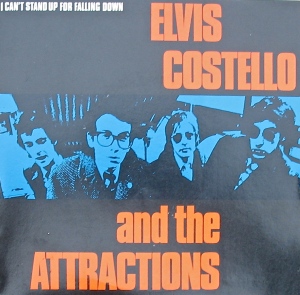 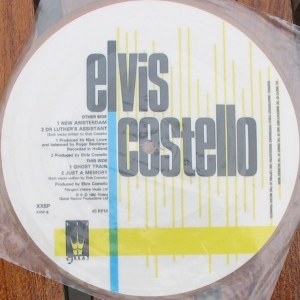 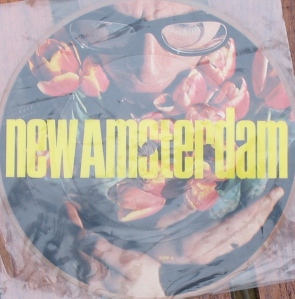 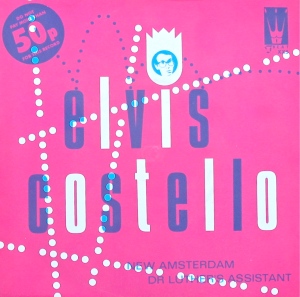 Get Happy!! is possibly my favourite EC record, though others, especially Armed Forces, vie for this coveted title. Significantly, the players’ musical tics do not overwhelm the material as on tired later Lps like Goodbye Cruel World, such was the strong 60s soul concept. As a band, the Attractions were never better than on this record, though Bruce Thomas gets special mention for a subtly virtuosic display of the bassists’ art. 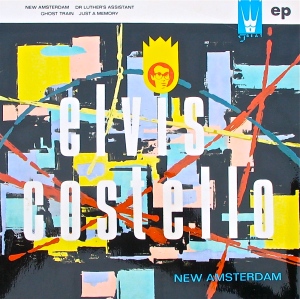 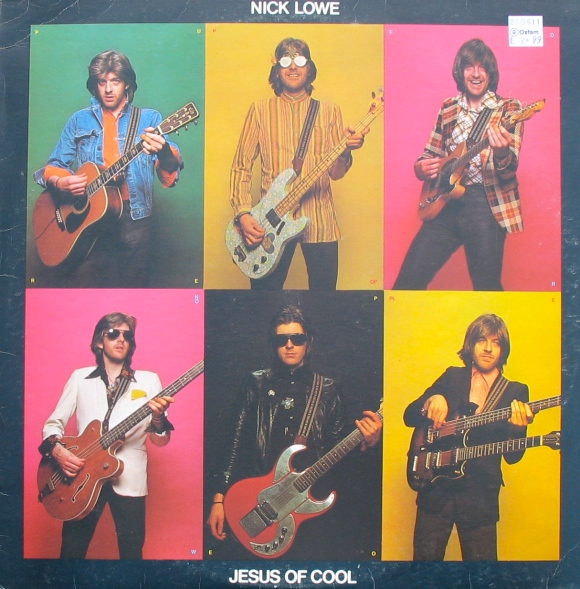 Right, let’s quantify this thing: Of the eleven tracks on Jesus of Cool, I already own seven on the comps 16 All-Time Lowes and Nick’s Knacks; another (“Shake & Pop”) is a reworking of the single “They Called It Rock”, also on Lowes; and while the “Heart of the City” included here is the breakneck live Rockpile version, not the studio take found on the aforementioned Lowes, I have the very same recording with Dave Edmunds lead vox wiping the composer’s on Tracks On Wax; leaving the Kiss-like “Music For Money” and the gorgeous beat pop ballad “Tonight” the only all-new songs. Giving half credit to “Shake” and a quarter credit to “Rock”, at £2.99 that works out to £1.08 per each new/partially new song. Still worth it, I reckon, for those songs, the title itself and my own completist fetishism.

And there’s this typically amusing inner sleeve, which looks like the late Barney Bubbles’ doing. 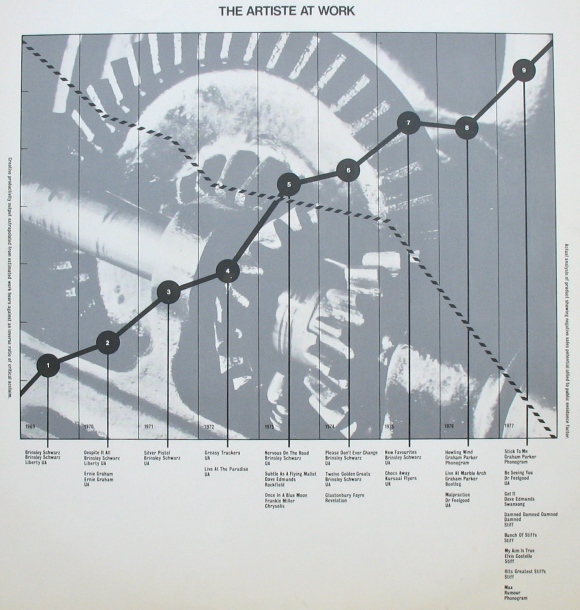 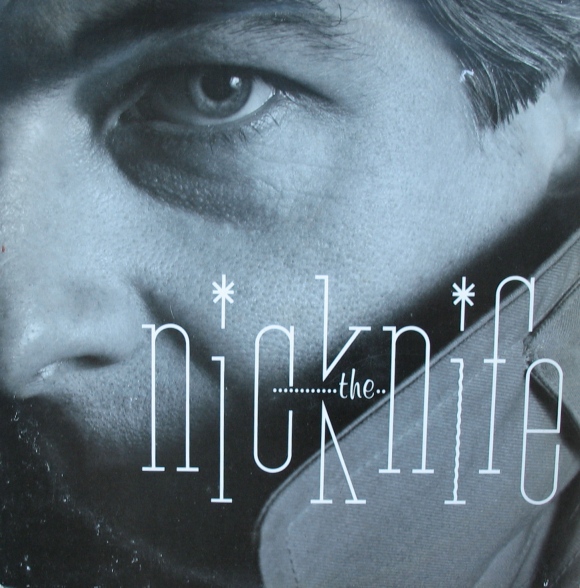 Last week, under the name The All-Time Lowes, I performed four Nick Lowe songs with my drummer friend Mark for my school’s annual fete: “When I Write the Book”, “What’s So Funny (About Peace, Love and Understanding)”, “So It Goes” and “Without Love”. Unlike last year, there are no pictures of the performance to share, but I did buy Basher’s third solo record for £1.50 yesterday; another gem of witty and assured Brit-spiced Americana.  Three cheers for Nick Lowe I say. 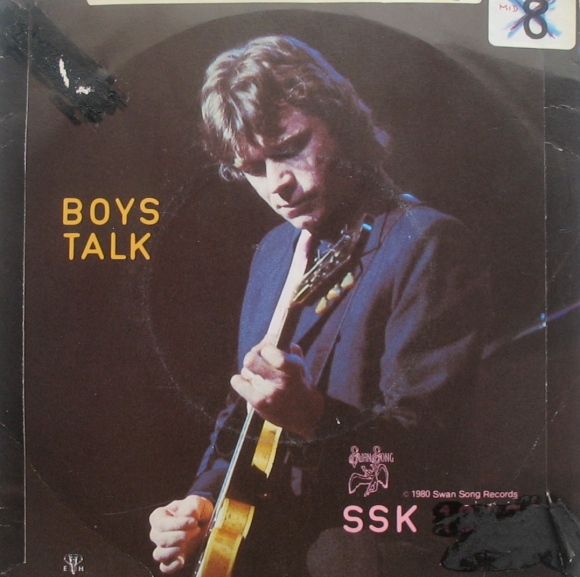 Closing in fast on the complete works of Rockpile, here is Edmund’s last “solo” 7″ before the quartet’s nominal debut Lp. The A-side does not concern us much being a straightforward version of the much-covered popular blues (two times number one in the UK, once in the States), but the second-biggest-DE-hit-referencing B is an amusing squib that sounds like a songwriting prank which emerged from a drunken challenge, viz. Billy Bremner: “I bet you couldn’t write a song entirely made up with all the girls’ name from all them 50’s songs by Elvis an’ the Everlys an’ that.” Edmunds: “I fucking well could. Nick, fetch me my writing pad.” Nick Lowe (voice muffled because of the bottle in his mouth): “Mmfskdf ofkd.” Terry Williams: “Guys, guys. I’ll go fetch the writing pad. Let’s cool out, stop bickering and write the song.” And so they did.

“Singing the Blues” was included on the patchwork Lp Twangin…, while the flip is available nowhere else as far as I know. 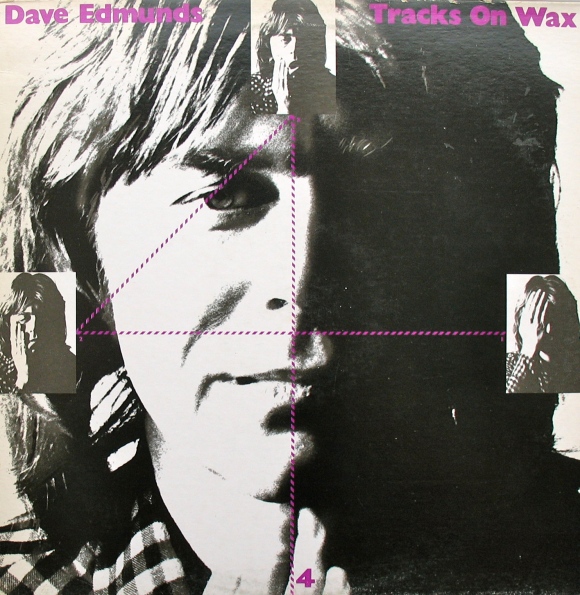 I adore early Nick Lowe solo records, most of which feature Lowe, Dave Edmunds, Billy Bremmer and Terry Williams, as well as the Rockpile Lp, Seconds of Pleasure, which is that group as a nominal band.  So when Edmunds’ awkwardly titled Tracks On Wax 4 (the first DE solo record with all the above players) presented itself at Delmelza House recently, I snapped it up pronto despite the facts that his contributions to Seconds are my least favourite and a little of his braying style of vox goes a long way.  Still, this fourth Dave Edmunds studio album is a Rockpile album in all but name and therefore, if not quite as, nifty.

Does anyone else think it’s odd that Edmunds was on Led Zeppelin’s vanity lable, Swan Song?