I was young, hip and groovy enough to buy Nasty Rox’s debut single “Escape From New York” when it came out (on 12″, natch). I thought it was okay, but obviously not impressed enough to buy the subsequent album, “Ca$h”, released and executive-produced by Trevor Horn and his ZTT label. Presumably no one else did either because Nasty Rox Inc. were never heard from again after this.

But having come across the album for a quid recently I’ve been enjoying backtracking to 1988 and reacquainting myself with this short-lived band who helped pioneer the dance/rock crossover. Or perhaps I should say partially enjoying, because the rock band elements sound bloody awful and dated in a way only late ’80s rock bands can.

The only thing, then and now, that ever gave the group a smidgen of musical credibility was the sure-handed turntable skills of C.J. Macintosh. He’s the fella who did all the clever scratching on M/A/R/R/S’s “Pump Up The Volume”. Along with Coldcut, he was a precocious talent who cut his teeth spinning at some of the earliest UK hip hop/dance parties in the mid-80s. Yet still it’s a mystery how such an unassuming-looking white english kid (23 when he made this record) got that good, that quick. 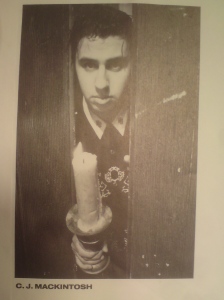 Consequently, it’s the tracks where C.J. is most prominent that still sound most impressive, especially on “Wooba Wubbaa I” with it’s dexterous manipulation of then-fresh samples like the Moog intro to The J.B.s “Blow Your Head”, and pitched-up, feminised Travis Bickle plaintively asking “Are You Talking To Me?” over and over again. “Wooba Wubbaa II” is equally satisfying – a moody, minimalist variation of Bomb The Bass’s “Beat Dis” with rippling, portentous piano loops – like DJ Shadow, a decade too early.  Unfortunately C.J. never seems to have become the dj megastar he clearly deserved to be.  I suppose it didn’t help that he allowed his career to be dragged down by working with dodgy groups like Nasty Rox Inc.

Funnily enough I was reminiscing with some online friends recently about the Violent Femmes and their popularity amongst the alternative/goth communities of the mid-80s which we were loosely involved with. In particular the song “Add It Up” (‘Why can’t I get just one fuck’, etc etc) brings back some fond memories from that period, being a staple dancefloor hit at the sort of clubs I used to frequent back then. But the whole album is of a similar standard of ramshackle excellence.

This is the 1987 reissue on London Records, which is quite fitting for me because it would’ve been around that year when I was listening to the Femmes and this is probably the edition that most of my friends would’ve bought at the time, rather than the Slash Records original from ’83. This copy is in near-perfect condition, still in shrinkwrap and mine for just 49p. Lovely!

The charity shop where I bought this was trying to flog a tatty copy of Rubber Soul for £40! (and why would I wanna buy that when I can now buy the tracks for 99p each on itunes, eh?? – Macca and co. need your money!! Please buy the whole back catalogue in MP3 format now, before the copyright expires and all surviving Beatles and widows are reduced to paupers!!)

Anyway, I was really pleased to get this near-immaculate copy of Led Zeppelin II for 99p. It’s definitely not a first edition, but I suspect it is an early 70’s pressing, with lovely gatefold.

Well it’s been a strange journey from here, to here, to the record you see before you now (with a big dose of fuzzy childhood nostalgia thrown in). They were asking £3 for this in the Fishponds branch of Cancer Research, which would usually be a bit steep for my tastes, but it is a double vinyl, gatefold sleeve, in beautiful condition, and I have been desperate for a good Steely Dan collection and basically I wasn’t leaving the shop without it!

Although, if I could just briefly return to the Beatles theme…

This is surely the nearest thing to a Fab Four reunion in their collective lifetime, as John, Paul and George all help out with songwriting and performance (though John and Paul careful not to stray onto each other’s songs!) which illustrates the fondness they all must’ve felt for their former drummer.

This isn’t even an original pressing, it’s a reissue on EMI’s budget subsiduary MFP (surely the most featured record label on this blog), but please (please!) ignore the old Oxfam £2.99 sticker – I paid 99p for it in the Kingswood branch of CLIC Sargent.

I wouldn’t say it’s a consistently good album, though it was worth being reminded what a great song “Photograph” is – self-penned in collaboration with George; one of two hit singles, the other being the slightly less satisfying cover of “You’re Sixteen, Your Beautiful (And You’re Mine)”.

I knew absolutely nothing about this group, or their album released on B&C Records in 1970. But I suspected it might be a shrewd investment when I found this VG++ copy for a quid recently. Some online snooping revealed a mint copy on ebay with a £90 price tag, so I guess this must be fairly collectable in classic rock circles.

To my ears, Steamhammer were a rather unremarkable-sounding heavy blues-rock combo, though there are some cool moments, usually when the singer shuts-up and the rhythm section goes all tribal-repetitive. Their album is packaged in a thick card gatefold with nice wraparound artwork by Chris Stepan. At first glance it looks quite lavish, but actually it’s a pretty rough, unlaminated brown card with basic one-colour printing. Smells lovely though, like an old library book.

I’ve always been of that post-punk view which dictates that Progressive Rock is basically, inherently wrong. I have lived all my adult life by that basic principle; consequently I’ve always shunned the classic albums of the genre.

But now I’ve reached a point in my life where I think “aaah, what the hell..?”

So I guess if you’re gonna start somewhere you might as well start at the beginning – wherever that is! Fate decreed that I would cross paths with a copy of Yes’ 1970 long-player “Time And A Word”, but I can’t be sure how full-on prog this is – it’s prior to the classic line-up, so no Steve Howe or Rick Wakeman, but we do have Jon Anderson on vocals, along with Bill Bruford (who I think went on to join King Crimson) bashing the skins.

I’ve been quite enjoying it. It’s okay to admit that I can pass a pleasant 40 minutes with a Yes album. No biggie. But maybe I should go and play a Fad Gadget record now, just to restore my sense of self.

Hmmm…I’ve had several near-misses with Cheap Trick…nearly bought a secondhand copy their Dream Police album back in the early eighties, but bought something else instead…and so it went on. But I always had a feeling I would like Cheap Trick, cos I do have a weakness for the kind of melodic power pop that they were apparently renowned for.

So I finally committed a pound of my hard-earned cash for a Cheap Trick record, 1982’s One On One, and my initial feeling was one of massive disappointment. Their Wiki page says of this album, “…the band changed direction again, this time opting for an album full of brash, shout-along hard rock songs”, which sounds like a perfectly fair description of the contents to me.  I think I need to hear the less brash, less shouty Cheap Trick before passing judgement on their entire oeuvre!

Admittedly some of these songs, like “If You Want My Love” and “Oo La La La” do kind of worm their way into your consciousness, displaying songwriter Rick Neilsen’s talent for crafting hooky sing-a-longs, and I kinda dig the phased drum sound on “I Want Be Man”, but it’s hardly Big Star, is it?

Somewhat unexpectedly, a couple of my kids – who generally prefer listening to new stuff like Lady Ga Ga and The Black Eyed Peas –  really like this record! Seems to work for the under tens…

A mono classic of a recording , on the London/Jamie label from way back in 1961.  This is the original pressing (HA-W 2325), with a somewhat worn sleeve, but near mint vinyl – plays with a real kick!

This record was produced by the mighty Lee Hazlewood, who also co-wrote a number of the tracks.   So what you get are some lush productions, grooving along in a rocka-billy-way with that distinctive ‘twangy’ sound – lush stuff !!

Hazlewood pushed right ahead to produce Eddy’s first hit. They formed a band made up of Al Casey, Larry Knechtel, and Steve Douglas called the Rebels. Hazlewood produced “Movin’ ‘n’ Groovin’,” an instrumental single featuring Eddy’s soon-to-be-famous “twangy” guitar. He achieved this specialized sound by tuning his six string down an octave, performing the melody line on the top strings and feeding the sound through a combination of echoes. This sound became Eddy’s trademark and was a creative fusion of rock, country, and rhythm and blues.

Had me grooving around the house at 8.00am this morning – what on earth I am doing listening to 60s r-n-r at this time in the morning is anyone’s guess – but sure beats commuting !! 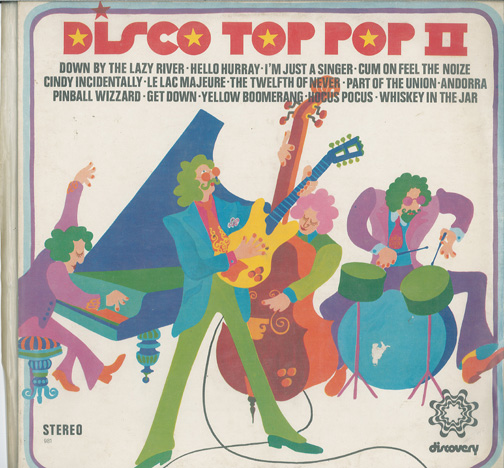 What the heck – only managed to find a single mention on this on the web – and that was for a copy for sale for 0.50 euros (about what I paid for it last week)…

So what you have here – is one hell of a cool sleeve – in uber-funky 70s colours and fonts.

This is some sort of MFP style thing of covers – but man what covers – this is a full-fledged rock outfit banging this stuff out here – and is bloody excellent.  The version on here of ‘Hocus Pocus’ seriously rivals (I kid you not pop pickers) the original Focus version – and being so familiar with the original – this is an absolute pleasure to hear.

Also worth a mention are fine versions of ‘Cindy Incidently‘ and beleive it or not ‘Whisky in the Jar‘.

This is exactly the sort of classic – otherwise unknown disc that makes all that back-aching crate searching worth the effort.  Classic stuff…..